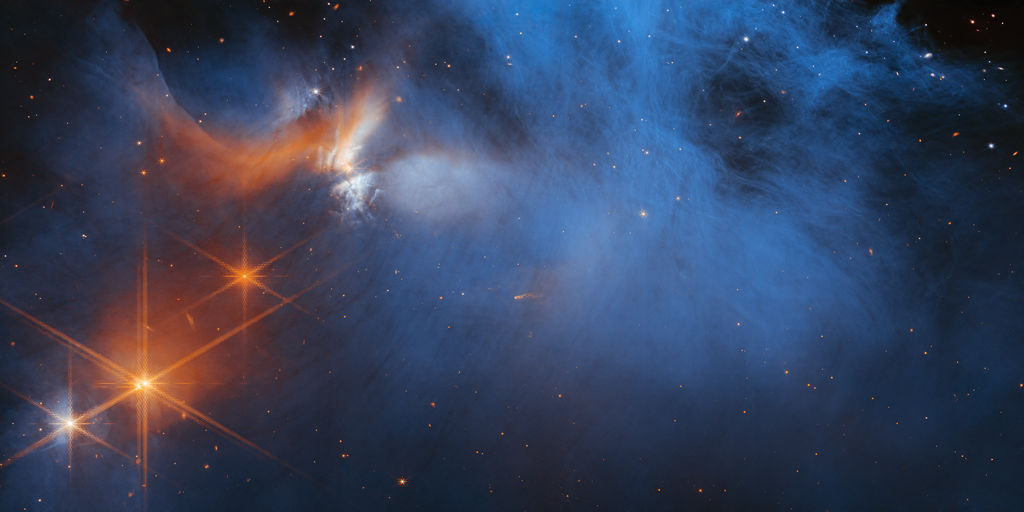 An international team of researchers, led by astronomers from the Dutch University of Leiden and using the James Webb Space Telescope, has managed to spot the coldest ice yet found in the deepest core of a dense and dark interstellar cloud.

Its molecules, at minus 263 degrees Celsius, are barely more than 10 degrees above absolute zero, the lowest possible temperature in nature at minus 273.15 degrees. This ice, made of various materials, is essential when “constructing” habitable planets.

In fact, similar ice particles made life on Earth possible. According to current theories, in addition to the impacts of comets and asteroids rich in icy material, our planet may have also received the ingredients necessary for life from the ice of the massive interstellar molecular cloud from which it arose about 5,000 million years ago. The sun, the earth and the rest of the worlds of our system.

In the new study, just published in the journal Nature Astronomy, researchers used the James Webb Space Telescope to study the constellation Chameleon, about 500 light-years away and one of the closest star-forming regions to Earth. “Without the Web,” says Klaus Pontopidan, co-author of the paper, “we simply would not have been able to monitor these ice sheets.” The region is populated by dozens of “pockets” filled with young or newborn stars. Around them, molecular clouds are so dense and dark that no background light from nearby stars can penetrate them. In fact, astronomers for a long time thought they were “holes” in the sky, empty regions where stars don’t shine. One of those dark clouds, the first chameleon, was precisely the subject of this study.

“This is the first time that the formation of so-called prestellar ices near the center of a molecular cloud has been studied,” says Melissa McClure, an astronomer at the Leiden Observatory and lead author of the paper. In addition to simple ices such as water, carbon dioxide, carbon monoxide, ammonia and methane, we have been able to identify many other compounds, including the more complex organic methanol.

Millions of years from now, when that molecular cloud collapses and gives rise to new stars and planets, those materials necessary for life will already be incorporated into it.

In order to see the dark depths of the Chameleon 1 cloud, the researchers illuminated it at infrared wavelengths with the faint light of two background stars, NIR38 and J110621. Next, they studied the “fingerprints” of different elements that appeared in the data from two high-resolution Webb spectrometers (NIRSpec and MIRI instruments). And so they were able to identify, one by one, the types of molecules present in the first chameleons.

In this way, McClure and his team discovered several compounds essential to life: water, carbon dioxide, carbon monoxide, methane, and ammonia. The observations also revealed signs of carbonyl sulfide ice, enabling the first measurements of how much sulfur, another element essential to life on Earth, is present in molecular clouds. Moreover, the researchers also discovered the simplest complex organic molecule, methanol, which is believed to be an unequivocal indicator of the early chemical processes occurring in the early stages of star and planet formation.

Will Rocha, another member of the team, explains that the presence of methanol indicates that stars and planets that will eventually form in this cloud “will inherit the molecules in a fairly advanced chemical state. This could mean that the presence of prebiotic molecules in planetary systems is a common consequence of star formation.” , and not a unique feature of our solar system.”

Molecular clouds like Chameleon I begin as regions of widely dispersed gas and dust, which are gradually compressed by gravity. And ice, which contains important particles necessary for life, forms precisely on the surface of those dust grains.

Furthermore, as stars begin to form and temperatures rise, the volatile nature of these ices causes them to revert to gases, allowing them to eventually migrate into the hot cores of stars and eventually into the atmospheres of planets. Therefore, the discovery of these pristine ices within Chameleon 1 allows astronomers to track the journey of those primary compounds from being in dust grains to being embedded in the cores and atmospheres of stars and future exoplanets.

Thanks to Webb’s data, astronomers now know, for example, that many of the elements detected in Chameleon I are less abundant than expected, given the cloud’s high density. For example, the researchers detected only 1% of the expected sulfur, 19% of the expected oxygen and carbon, and only 13% of the total nitrogen they expected in their calculations. The best explanation, the study says, is that these elements may be trapped in other ices that do not appear at the wavelengths the team observed in this research.

In the coming months, the team plans to use Webb’s data to calculate dust grain sizes and ice shapes. “These observations,” concludes McClure, “open a new window on the pathways for the formation of the simple and complex molecules needed to manufacture the basic components of life.”